Pros and Cons of GameSalad 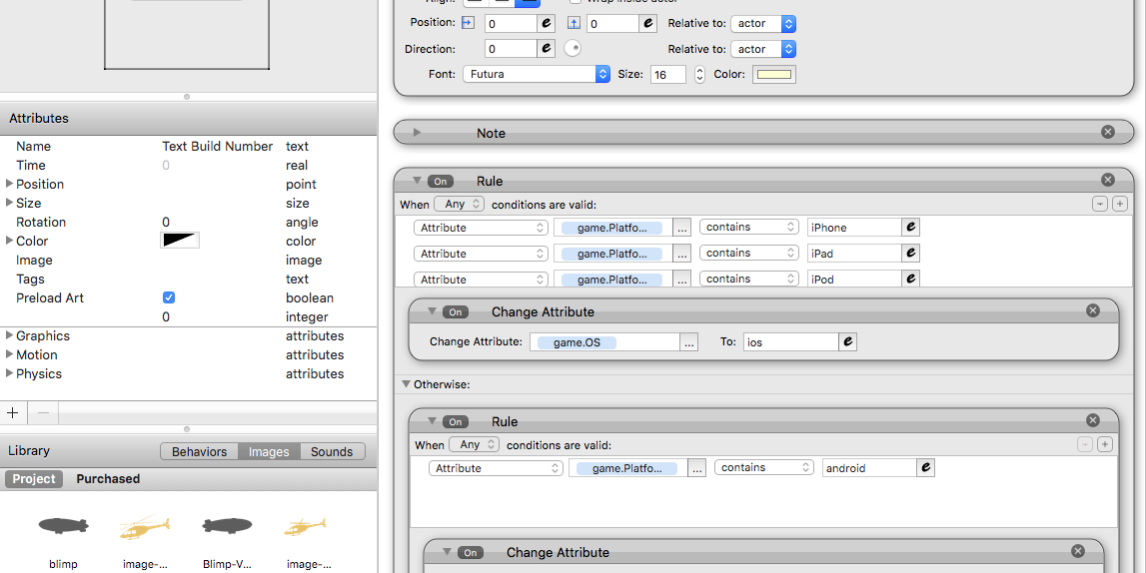 Should you use GameSalad to build your first game? How about the next one?

So far, I’ve mainly posted updates on Airlift for our beta testers. But there is a lot that goes into game development behind the scenes that may be of interest to players or prospective developers. So. today I’ll discuss the pros and cons of the development tool that I use to build my Airlift game: GameSalad.

GameSalad is an IDE (Integrated Development Environment) / game engine designed for non-programmers. Instead of using a text editor for coding in a programming language like C# or JavaScript,  GameSalad uses a drag and drop interface that produces the underlying code for you. Its write-once-run-anywhere type compiler can spit out apps for iOS, Android, Windows 8, Mac OS, HTML5, Tizen and Amazon’s FireTV.  For first time game developers, it is a great way to quickly get a project going. However, it also suffers from some serious drawbacks and anyone needing a professional game development tool should probably look at other options such as Unity.

Now, despite knowing how to code, I chose GameSalad because, originally,  I just wanted to produce a simple game or two quickly and GameSalad was easy to pick up and just start producing. At the same time, I began learning Unity which is amazing, but has a fairly steep learning curve. Also, I am not a 3d artist, so learning to use 3d rendering tools would add an extra layer of difficulty.  With GameSalad, I was able to quickly get a game idea sketched out.

However, I quickly discovered that not being able to see the underlying code was problematic.  For one, I could not be sure exactly what the game engine was actually doing and had to rely solely on debugging statements to test hypotheses. Also, standard text-editor operations like search and replace, copy and paste and color coding don’t exist in GameSalad’s GUI (graphical user interface.) So in many ways it is actually much more time consuming and difficult to use than coding would be.

Furthermore, the platform itself suffers from a few major bugs and missing features that make it difficult to use for professional work. Despite being GUI based, it has no select-all or alignment tools for the scene editor. Need to visually adjust a bunch of objects in your scene? You’ll need to edit them one by one.  Want to group a bunch of objects together and copy and paste them onto all your levels? Sorry, you’re out of luck.  These and other features such as polygonal collision detection, which the platform is finally due to get soon,  have been requested by users since at least 2011. And, until recently, the Mac version also suffered from frequent crashes which cost me hours of redoing unsaved changes.

So why did I stick with it? Partly because of the sunk cost fallacy. I invested a lot of time, and a bit of money (GameSalad costs about $325 per year) and was making good progress on Airlift. I wanted to see it through.  Also, the GameSalad community is pretty amazing. There are a bunch of people on the forums willing to help solve problems and offering video tutorials. And although GameSalad has been quite painful at times, it has also been a lot of fun. I can usually implement new features quickly- sometimes within minutes. This has meant I can focus on improving my game over learning the tool.

So,while GameSalad worked out more or less well enough for my first game, my next one will be done in Unity.